What did I do?

This week I asked Kelsi if she would read “Moira” and give me feedback on whether or not it’s done; she said yes.

(This is the very first book I ever wrote and has sat untouched for a few years. I have only had one reader/critic on this book, and he was not a writer. Editing this story has been hampered by his feedback: I haven’t felt clear on whether or not to use it and I’ve lost my footing a bit. I also have some insecurity that it’s too revealing of my angsty, young adult nature.)

Next: print the MS and mail it to Kelsi. 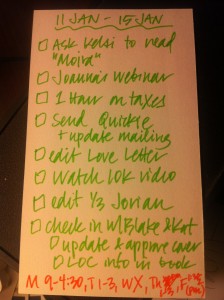 I attended Joanna Penn’s webinar on the Seven Steps for Successful Writing (or something like that). I usually adore everything she does, but this went a bit fast for me, and it was repetitive info to what I’ve been reading/listening to lately.

The webinar was hosted by Joel Friedlander, and I learned that he offers book cover feedback, and has annual cover awards on his website, www.thebookdesigner.com. I took a peek at that and am interested in perusing more.

I sent out The Creative Life Quickie to my email subscribers! (You can sign up here; you’ll even get a free audio download of 5 of my favorite stories).This is something new I’m starting up: a one-sheet guide for a writing-/story-related topic every month exclusively for my email community. Since it’s been ages since I’ve done anything with email marketing, this task also included making a new template on Mail Chimp and updating lists and groups. I referred to the emails I get that I actually want to open and read (Seth Godin’s blog updates, Alex Franzen’s letters, and Austin Kleon’s weekly list of 10 things); all of them are clean, rather short, and the latter two had plenty of links to good content. It felt a bit tricky to write something that was valuable in the body of the email and not just rely on someone to click the free download for the worksheet. (I’m subscribed to some list where the emails say only what the topic is and have a “read more” link. I never click it; it feels click-baity, and I don’t like to be dominated or tricked).

I edited five chapters of “Jorian.” It was really lovely and fun to revisit this middle grade manuscript, written a year-and-a-half ago. I could feel myself doing a very different sort of first edit than I’ve done before– really using what I’ve been learning about outlines, structure and three acts. I also chatted with my sons’s principal about it, and about the three act structure. He said that in the second act the characters show their flaws and vulnerabilities. That was really helpful! (And I’m seeing all these patterns showing up in “Harry Potter,” which I’m currently re-reading for the umpteenth time.)

I checked in with my layout guy, Blake. I’ve had questions (perfectionist for sure, but legit) about my cover image. I’ve had it uploaded at IngramSpark for over a month but have worried that some layout lines will show up in the printing (and I’d have to upload a new image and pay the additional fee). Blake, and my design-savvy friend, Kat, have played around with it and concluded that the lines only show up in pdf formats… so it’s off to the printers! He also finally got the Library of Congress info, so I think he’s uploaded a revised interior for the book that includes that.

Next: take the plunge and do this last step in publishing “The Marvelous Imagination of Katie Addams!”

I did not spend an hour on my taxes. Why not? Because that did not sound fun, because I have a habit (verging on tradition) of putting it off, and because other tasks seemed more immediately relevant. However, I wasn’t saying I would complete my 2015 taxes, just spend an hour; an hour would really set me up well for getting them done without drama.

I didn’t edit a “Love Letter” audio recording. Probably mostly because I spent most of my time on the Mail Chimp email. But there could be some resistance since these meditations are pretty intimate and vulnerable for me to share– flying my freak flag, as Leonie Dawson might say.

It would help to schedule the week itself rather than just having a list and risking one item dominating. (I have been thinking about estimating how much time a task needs, and using that to see if I’m being at all realistic in my to-do list; or if I will be taking on the challenge of getting something done quickly rather than doing it perfectly).

I also didn’t watch another video for the 10K Readership course. Again because I didn’t set any time for it and viewed it as “easy.” But I know I’m still a bit daunted by the large scope of this topic. It would be supportive of my business goals to watch at least one video a week, and have time to reflect on it and brainstorm actions to take so I’m working through the levels as I learn them.

I didn’t edit a third of “Jorian.” I did about a ninth of it. I clearly made email the priority, and this the second; I worked on this here and there in small snippets of time. I appreciate that I grabbed that time, but it’s important going forward to actually plan when I’ll do it (not just get a chapter or two in while my son plays on the playground after school). That’s part of not being overwhelmed and getting buried under guilt, believing that I can’t rely on myself and that I’m faking being a professional/adult.

Schedule more time for next week’s wrap-up so I’m not dropping off without a bigger reflection!