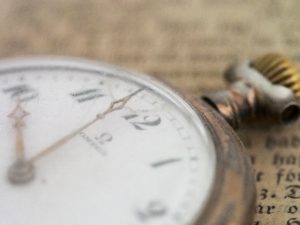 Photo by Niklas Rhöse on Unsplash

Hailey had a magic pocket watch. The thing was, she didn’t know it was magic. She only knew it was old, and it felt nice in her hands.

He was looking through a stack of records.

He looked up, eyes blurry through his thick glasses. “Hmm?”

He came over to her, tucked the album he held under his arm, adjusted his glasses, and looked.

He had wavy white hair (not bald like so many other grandpas, which made Hailey feel proud, even though she knew it was unfair)— and he moved slowly through the world. She had asked her mom about that once.

“Is it because he’s old? Is that why he’s forgetful?”

Her mom had laughed. “No, your grandpa is just always somewhere else, and it takes him a while to get back.”

Hailey had been puzzled.

“He’s some other place in his mind— he’s a great thinker, your grandpa, and he travels far away without going anywhere at all.”

“Oh! Like Narnia,” Hailey had said. And after that she always liked to watch him come back to this world. It reminded her of a video she saw on the Discovery Channel once about a whale coming up from deep water.

Grandpa gave the little knob on top of the pocket watch a turn and held it up to his ear, cocking his head to one side.

“Does it work?” Hailey asked. She knew it wouldn’t’ matter— he’d let her get it anyway, not like if she was out with Nana and Papa, her other grandparents. They were practical. They had been farmers all their lives, and Hailey figured you couldn’t go traveling to Narnia if you had to plant corn and milk cows. She knew Grandpa would be able to tell the pocket watch was special.

“Hmm,” he mumbled. (He always mumbled— unless he was reciting Shakespeare or Longfellow or one of the other poets he liked so much— then he was “a great orator,” as Mom said.)

“Something’s loose inside— hear that rattle?” He held it out to her. In the stillness of the dusty old shop, she could hear some small piece sliding against the casing. She nodded.

“But you can fix it,” she said. It wasn’t really a question. Grandpa was an engineer. He had worked on building rocket engines for NASA long ago. Mom agreed that Grandpa’s Narnia was probably full of gears and gadgets and inventions.

He shrugged and handed it back to her, which was Grandpa-speak for “yes.”

Hailey held it close and turned the dials, feeling the now-smooth filigreed case, enjoying the click of the hidden gears as she adjusted the time.

Half an hour later, Grandpa said, “Now, then,” and Hailey knew that meant he was done looking. He gave the man at the register some cash and they left the store, treasures in hand.