Band practice with the upright bass!

Oh my god, it was so fun– to have that bounce and depth and rhythm. To be three instead of two, which does some kind of magical math equation to the sense of potential and possibility. To be not perfect together. To drink beer (even if mine was only metaphorical). To make plans for more songs just by me singing a verse and then Ben jumping in with the slappiest bass lines.

I swear we were having fun, even though Jon and Ben seem to be laser beaming each other in this photo.

And I can’t wait to add the fourth and final member to join us soon and see what Big Bangs happen in the universe then!

A blanket in the yard, a wandering cat, sun and breeze, and some messing around on the parlor guitar, trying out different combinations and feeling how they might be the chorus on the new song scrawled on wide ruled paper a handful of pages back.

It dropped me gently back into myself, bridged the day’s ebbs and flows the way sound without words magically does, and it felt so good to participate, to create, not just consume.

There’s a drummer downstairs, and every now and I then I hear him tapping out rhythms on the walls, and I tap back. Matching, improvising, changing, challenging.

He came upstairs today, poked his head around the door: “Who is that? Is that Rose? You’re really good!”

I said, “But give me an egg shaker on stage and I’ll lose the beat.” Which is just bullshit.

And isn’t that a true delight: a spade’s a spade, and an old lie doesn’t hold up to daylight anymore.

When the truth knocks and asks if you can come out and play, you should answer with a Yes.

When you move all the lamps and set up the laptop on a plant stand.

When you find the prettiest potted plants to decorate the piano top, and move your Golden Gnomie award into the frame.

When you walk around the house singing harmony parts and recording them into your phone, and then singing the melody along with yourself.

When you strew papers about, looking for those story notes you haven’t needed since last March.

When the day job lasts the longest it ever has and you just can’t settle because even though the theatres are closed, even though there are no tickets to sell or comps to give magnanimously, even though it’s impossible or at least improbable– TONIGHT THERE IS A SHOW.

It begins. Two bass players and a Swedish folk singer who thought she’d irrevocably chosen the path of words, not music, more than two decades ago.

A year ago I had less than zero interest in doing zoom concerts. A year ago a lot of other things were different in my life, too.

Now, as with the almost-March wind blowing the ice away, as with the faint memory of green growing things becoming more real and less like a dream, I become a performer again. Slowly, in small doses, in a way I never knew I could be.

We took it in turns, plucking at strings and transposing fairy tales. The audience watched from their own little windows and unmuted themselves to applaud. They said we ought to collaborate as a trio, that they would come to see that show in the Magical Future when such things are possible again.

After the show we talked about collaborating– no big deal, just me and Liz Draper, who plays with the Grammy-winning Okee Dokee Brothers and Charlie Parr (and pretty much every band in Minneapolis, it seems), and Chris Bates who was once her mentor and who plays with the esteemed Sam Miltich and who surely has a longer list of credentials than that. We talked about making music in the harbor, on shore or in boats: kulning and jazz bass– antiphony al fresco.

You step out into what’s new and find you’ve been loving it all along. And when you look around, there are some pretty cool people loving it, too. 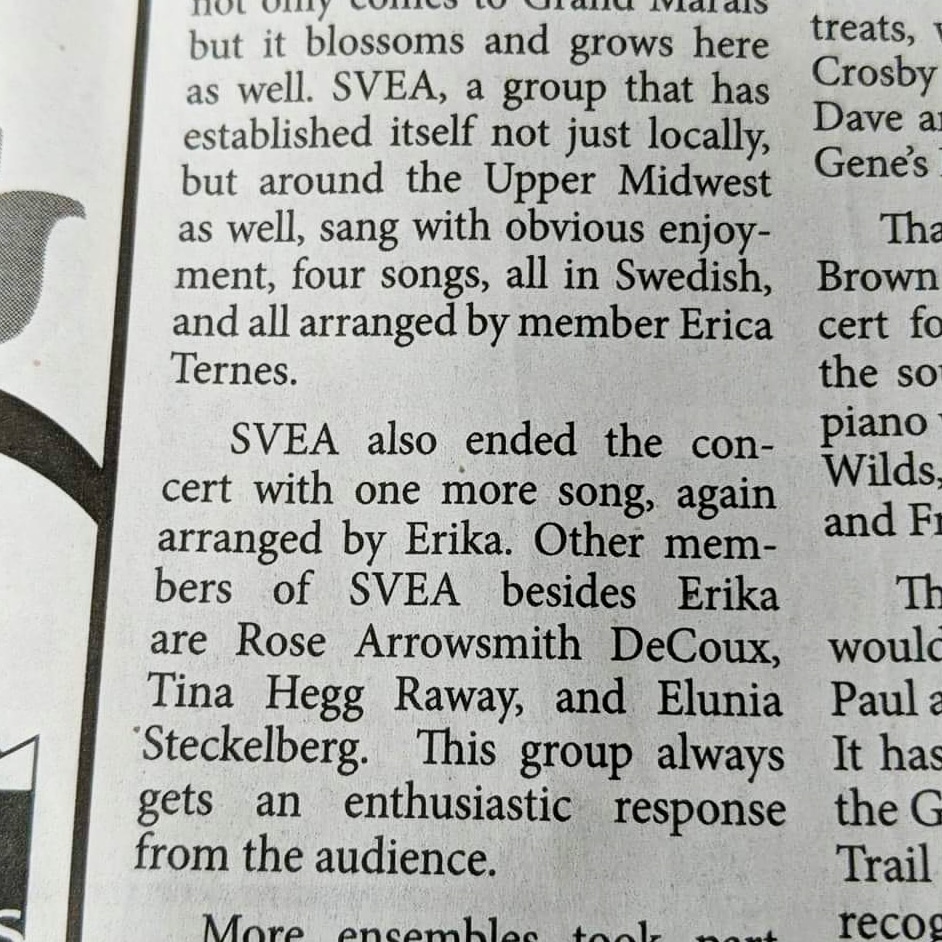 Nice words about SVEA at a recent gig.

We’ll be at WTIP’s Radio Waves Music Festival this Saturday at 11:40am, and at North House Folk School’s Unplugged Music Festivalat 6pm the week after that on Saturday the 14th.

We hope to see you there– as you can see, we have a pretty good time. 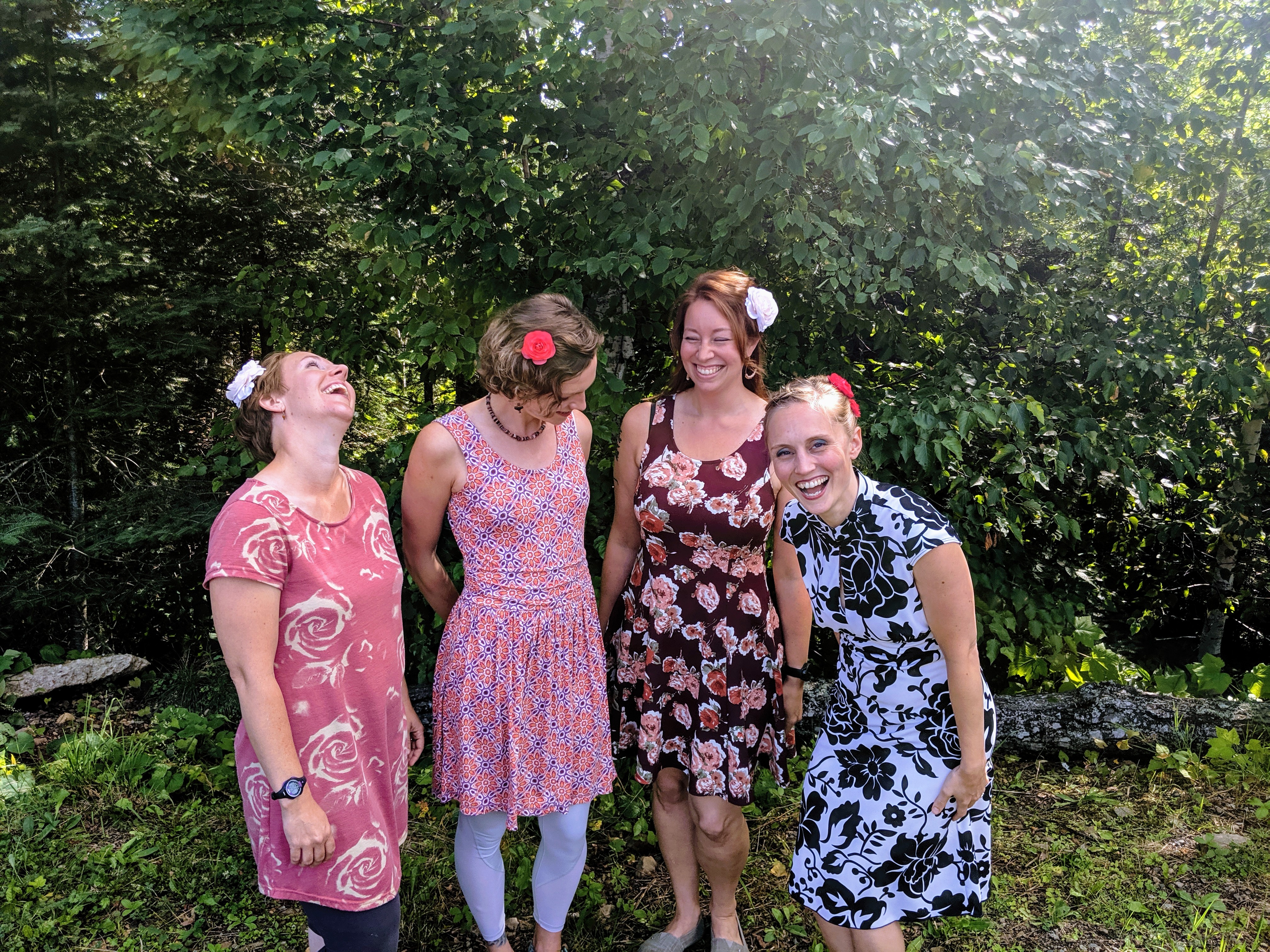 It turns out that I can sing. I mean I can do some operatic Edith Piaf thing.

At SVEA rehearsal last week I was goofing around and did a Big Viking Lady high note. Tina and Erika whipped their heads around so fast I could almost hear their necks cracking. “Ok, you can not tell us you can’t sing loud,” Tina said. I began to melt into my seat, shrinking like a snail. “I was just faking it!”

Erika looked at me with an expression that was not quite disgust— not towards me, any way, but the way one is disgusted by the patriarchy or crappy cafeteria food. “That is not faking it.” (The look was more like what you’d give a kid who is old enough to behave properly but tries to revert and pitch a fit. Um, no. That’s not happening.)

My immediate reaction was to sweat. Profusely. To squirm. I think I went into some stand-up routine patched together from every video I’d watched online in the last month. Then, as if to prove them wrong, I did some acrobatic scales. (I might have even rolled over like a dog: pleeeease don’t look at the roll of toilet paper I destroyed, here’s my belly!)

I tried to sing some songs like that during rehearsal. It sort of worked. “You were doing fine, and then I don’t know what the gremlins said to you, but you went back to singing from your throat,” Erika said, still with a slightly appalled, no-nonsense look.

Tina said I should work with Erika to figure out proper breath support. Basically, the jig was up: not only do they know I can sing in a Big Voice, but because they witnessed it, my conscious brain is forced to confront this information.

It was exhilarating and horrifying, and after rehearsal I was exhausted and as crabby as if I had a hangover.

This week was more of the same. Tina got me to be goofy and I did the Big Voice… and then I had to peel off three layers of clothing (I fully expected to be forced down to my long johns before the hour was up). I thrashed around and did my penitent stand up comedy shtick. “I’m pretty sure this is going to happen every time until I sweat out the demons.” They graciously did not quit SVEA and go in search of someone with more stable emotions or core temperature.

Every time I tried the Big Voice I waited for them to say it was too loud!, but instead Tina said I’m still not louder than them and we are just now starting to blend well.

It is an extremely uncomfortable feeling. All I want (I think) is to be Fabulous. Rock Star-Ballerina-TED Talk Lecturer-Academy Award Winner-Best-Selling Author-Fabulous. But this is so loud! I’ve tried to trace back to the inciting incident that is causing the alarm bells to clang so furiously, and I’m coming up with nothing. Being a good singer was totally ok in the more stayed, Baptist side of the family, and I had a voice teacher with a Big Voice, so I was certainly exposed to it. I don’t have a clue.

In a moment of furious self-analysis alternating between anguish and incredulity, I thought about my sister, Abbey. Abbey has a really cool voice. Though I haven’t heard her go for Edith Piaf/Viking Opera Singer, she has an amazing low range, she has cool vibrato, she has a voice much bigger than her physical stature would lead you to expect. She’s an itinerant musician. But she’s my little sister. Part of my brain kicked in in a delightfully cliché superior-older-sister way: Well, if Abbey can do it, you can definitely do it. (Ahh, the ego is a strange horse to ride, but sometimes it gets you where you want to go.)

Last night, while still feeling the detox of demons leaving my body (scrabbling around for better handholds?), I told Jay about it.

He said, “You’re a better singer than you think.”

I said, “Ok, but I’m way weirder than you think! What happens when all that comes out? What about the spew of weird improv-comedy blather?”

He said I should just let it out, but then didn’t seem thrilled by my immediate showcase of character voices and anecdotes. (To be fair, he was already in bed with a pillow over his head when the whole conversation began.)

It feels so weird, it feels like driving on ice— if I take away one filter [Don’t Be Loud], it feels like all the other filters and barricades between me and the edge of the cliff vanish, too.  Who knows— maybe in addition to being able to Sing Big and be Extra Weird, I also have wings and I won’t plummet into madness/freindlessness/stardom/a whole new personality. Maybe I’ll fly around, have a great time, and never be afraid of that particular edge again.

Besides the emotional discomfort, it feels physically weird, wrong, strange, like learning better posture or how to cross country ski. Nothing is habitual, and I’ll suddenly drop all my breath support and not know how to get back on board. Honestly, it’s the first time in my life I’ve thought maybe I should start exercising because cardio feels bad! That I should practice feeling horrible and doing something anyway, both for the improved breath support and core strength, and to do something that feels physically more wretched than singing! (If you see me at a Zumba class, you’ll know why).

I think it might not take a thousand years. I’ve been thrashing around through first drafts of stories, and over and over again it turns out if I just flail for a minute or two, I settle down eventually and things turn out pretty well, or at least I have something to build on.

In the meantime, I guess I’ll be heating our house purely on the power of the Shame/Courage circuit. If you see me around town wearing a clown nose and muttering to myself, count it as a sign of progress.

The SVEA Singers will do a few songs as part of the spring choir concert on Thursday, May 18th. 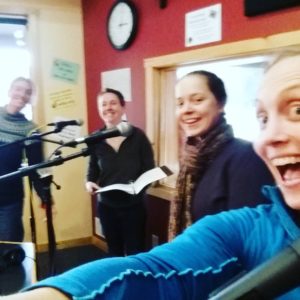 The choir is directed by SVEA’s own Erika Ternes, the musical genius who can write an arrangement in five minutes or less. 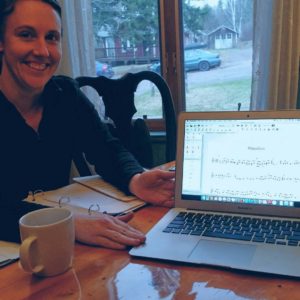 … and who can do stupid human tricks:

Here’s another lovely Swedish folk song. You can listen to my research playlist on YouTube here.

Ever since starting SVEA, my Swedish a capella folk singing group, a few months ago, I’ve been pretty addicted to finding new folk songs. (YouTube is great! Here’s my playlist.)

I did some late night translation of this very pretty lullaby.