I’m being cozy with myself. Curious, and gentle. Quiet, on this day without work or much for obligations.

I dropped my son off at school. (He was wearing a double-breasted coat, gray wool with a brilliant fuscia lining. It was a lost-and-found offering from a friend. I love that he loves it, and that I am able, in spite of all my acculturation, to let it be irrelevant that the coat was designed, tailored, and sold with a female market in mind, not a nearly 12-year-old boy).

I’m wearing a mismatch of clothes myself– only half-changed out of pajamas for the two mile drive into town and back. Clothes are a funny thing– so expressive and particular and important, and so absolutely not at the same time.

I made some tea– a pastel rainbow palette grown in Wisconsin that I’d forgotten I had. I drew, but digitally, and yet it still felt present and connected. I answered an email– and thought about the ways to say “no” that are both true and likely not to be interpreted as unkind by the recipient. I was asked to sing for a local event, and didn’t want to in the least! Not because it’s not a good cause, but just because I don’t want to.

I want to prod, as with a stick in dirt, not push as with a plow through a field.
I want to scatter seeds just by walking through the tall grass and the trees, not plan and plant straight rows of things to harvest, preserve, hawk.

That’s not to say being a “working artist” is only that: selling your wares. But it looks like that right now, and I don’t want to set up a stall in the village square and wait to see who wants what I’m selling.

I’m not actually resentful of the market. The resentment is wanting, despite how right I feel living my life a different way right now, to want to go to market. Because I haven’t reconciled that I wanted something before, and now I want something else.

Neither wanting is more right (or less right) than the other. Summer’s not more right than Winter– and I like both… and I’d choose Summer every time.

Isn’t it good that I don’t have a choice? That I don’t get to decide everything? That the way I want to live my life means I get to practice loving something as it is, something that I would not pick?

Because there is no such thing as “re-emerging.” There is no disappearing. There’s just a common way of noticing we’ve been told is the only way, and it is about crops and yeilds and profit margins and hours of daylight and wordcount and bank balances.

But if I don’t push, if I don’t resist, if I am Here… There’s the truth, and telling it or not. It’s the law that extends through everything, Summer and Winter alike. 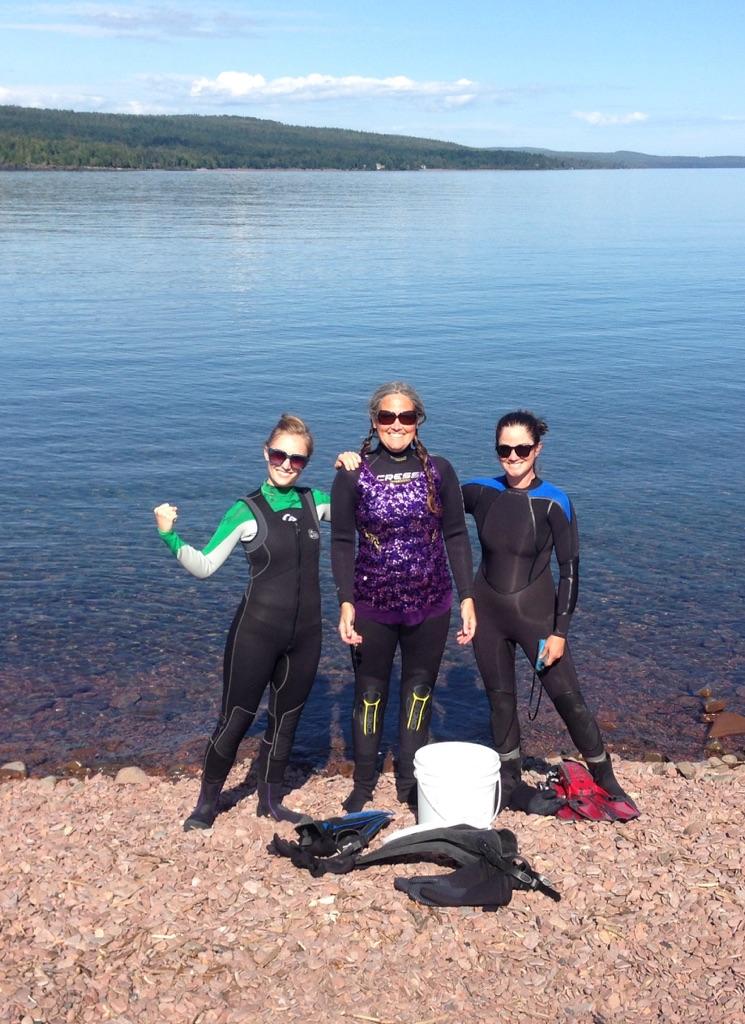 Last winter I saw a photo of these two fabulous ladies swimming in Superior… in January. I said, “I need a wetsuit!,” and next thing you know, one showed up at my house!

This was a magical swim– an hour (an hour!!) in the big lake.

We hailed he passengers on the Hjørdis as she sailed into the East Bay.

We swam through a passage between the rocks.

We sat mermaid-like on the reef just beyond Artist’s Point.

It was magical to be at eye-level with the lake, especially on a day when the water was a glassy, platinum blue and the sky reached down like a bowl, as if the edge of the world we’re just Over There and if we were bold enough, we could swim to it, and beyond.

The Copy Cure (Marie Forleo and Laura Roeder) said you can write a blog post with a tweet– that no one ever opened an email and said, “Man, that was too short!”

When I started thinking about life in facebook posts, (as in, “Oh, I’ll say…”) I felt a little worried.

It’s gross to always be broadcasting.

For a w hile I decided if I wanted to post a status, I actually had enough to say in a blog post– and I did.

Now I’ve been cutting way back on online time again– ‘Living Locally’– and I feel the shift happening again: I want to write.

But I want to write a letter, pass a note– sign your yearbook– not shout in a megaphone.

It feels beautiful to write out compact thoughts, to explore and give value and time to snippets.

Evidence: This one is written on two sides of a recipe card.