Let me tell you about my granny. 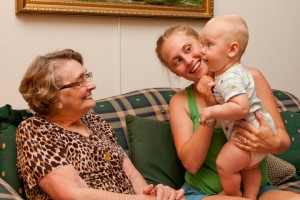 She was born in 1923 in Belgium, which made her 92 ½ when she died this morning. She met my grandad at a dance hall during World War II; he was from England. They sent letters back and forth, though he spoke no French and she virtually no English. She didn’t see him again until he arrived in Belgium for their wedding. (So many war brides showed up in England and then never found their promised husbands that she couldn’t enter the country before marrying him. Her friends said, “He’s not going to come, he’s not going to come,” and she kept saying, “He’s coming.”) All Grandad knew was when to say oui during the ceremony. Then they went home to England. 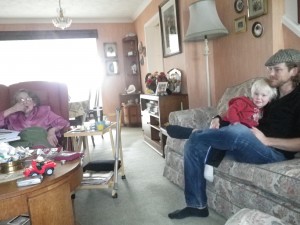 My mom (their former daughter-in-law) says that Grandad had no idea how much she talked, but once her English picked up he discovered just how opinionated she was. My visits to her home are always in the context of a heated monologue-debate about food. Last time it was about mustard: Sainsbury’s, an English grocery store, was having French mustard made in France– but was it really French mustard? This was discussed with Uncle Phil while the week-long snooker tournament played on the television in the background.

When my sister and I traveled solo in Europe in 2002, the discussion (held at length at a very nice Italian restaurant, then at a coffee shop, and back at the house) centered on coffee: countries of origin, how it should be roasted, the right way to brew it, and when to drink it. Back then Uncle Pat was still alive, and, as my mom said, “Pat would argue that the moon was made of cheese just to get an argument going,” and was known to switch sides seamlessly halfway through to keep up momentum; he and Granny and Uncle Phil vocalized about coffee for six hours.

My cousin, Ben, lives over there and had weekly dinners at Granny’s house. He sent me a message once: Phil had made apple crumble, and he and Granny were now assessing its merits and whether or not it lived up to Plato’s Form of Apple Crumble (though I don’t believe they would have called it that). The debate culminated with Granny throwing up her hands in the penultimate French way and saying with heavy accent, “To me, it’s nothing.” 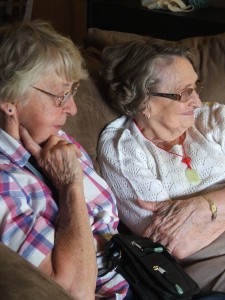 Kathryn, the Smooshy Grandma on left; Paulette on right, 2010

I always knew she was the Scary Grandmother. I think everyone has one Smooshy Grandma and one Scary one. Granny was the one with strict rules and high expectations of manners (hinted at in the moments when rules were being bent and exceptions were being made– a tendency I notice in myself).

But she was also the grandparent who gave permission to be assertive, bold, rather fabulous. She was a young woman during a time of war rations, but her family always had butter (this still means a lot to me, having grown up surrounded by my stoic Scandinavian Depression-era people who waste nothing and try not to inconvenience anyone or ask for too much). 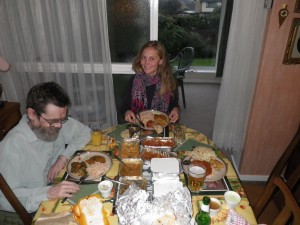 post-India: a huge spread of Indian food with Uncle Phil, 2012

She’d been widowed for twenty years, and though it must have been devastating, she held her own in the world. I love that she got her hair done weekly. That she wore nice clothes and jewelry (how many grandmothers can wear a leopard print top and look classy?). That when Jay and I visited she served us three kinds of cheeses and a choice of aperitifs; though she could no longer cook like she used to (homemade sorbets with waffle cookies overshadow the multiple dish meals from childhood memory) she still heated the plates in the oven before serving us a top quality frozen dinner. I had tiramisu for the first time at her house. I brought in the milk bottles (so European! So thrilling to peel back the foil tops!). I smelled her particular hair spray (in the gold bottle) and perfume (with the red and black top).

My grandad was the letter writer, and I was devastated when he died of a brain tumor. He’d send letters to me and my sister (individually– a man who understood the dreams of children! It was wonderful to get a blue airmail letter addressed just to me); at the bottom, in her curlicued French cursive, Granny would always write some version of, “Well, as usual, Grandad has given you all the news,” then sign it with an inverted pyramid of Xs.

I wonder what it would have been like to grow up down the road from her. To take the city bus to her house the way Ben did. Maybe more of our family’s hypercriticism and perfectionism would have rubbed off on me. Surely I would have been an even better cook. I expect I would have kept my French brushed up. Would have sneaked back into her bedroom and found the letters from Grandad she wouldn’t show me (“Not for young eyes,” she said, wagging her finger at me and looking very pleased with herself).

I’m sorry I didn’t know her better, but some grandparents you know well and intimately as a child, and some you don’t. But she formed me anyway. I can see her face in the shape of my own. Give me an hour around a French speaker and I’ll start puffing out my cheeks and shrugging my shoulders in her exact manner. And as my husband can attest, I’m nearly unbearable in my evaluation of my own cooking– Midwestern as I am, I completely understand the Belgian sentiment that food is divine and our mortal efforts will always, always fall short.

Every sprinkle of nutmeg on simple, buttered pasta is a nod to her.

Every nicely laid table, every snifter of smokey Laphraoig, every slice of Nutella toast.

Oh, and the flair for the dramatic is mine, whether I want it or not. Because I, too, fully believe that a dish of apple crumble holds such magnificent possibilities that I am justified in throwing up my hands, pursing my lips and giving it up.

To me, it’s everything. 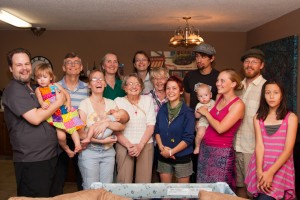